This visit with my sister and her family is just that, a visit. No agenda, no list. In fact, the only firm items on the family's agenda for the day were for the the four-year-old: a soccar game in the early afternoon followed by a birthday party. So, my sister introduced Tal and me to Moe's at lunchtime, a lively eating establishment at their local mall specializing in southwest fare, followed by the sporting event.

It was wonderful! There were hundreds of children playing on dozens of fields and, I would guess, thousands of adults on the sidelines. There is nothing like watching little children play soccar, all in a knot, all legs and feet, moving, generally in the right direction, in pursuit of the ball. The coaches, who at this younger level of play, double as referees, are earning jewels in their crowns, teaching the children much more than the rules of the game -- responsibility, fairness, giving an activity undivided attention -- with varying levels of success. 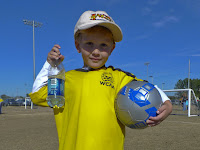 The athlete, still in this soccer attire, went on to the birthday party with his dad and the rest of us went home, the visiting almost uninterrupted -- along with games and movies -- until sleep caught up.