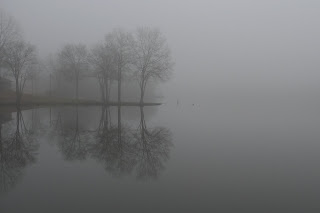 The days of late have been wet and cold. And, today dawned foggy. With errands to do -- like the grocery story and the pharmacy -- requiring moving a vehicle, we included a walk on the Governor's Rail Trail (a two-mile round trip) in Edgefield part of our outing. While we set out across the dam at Slade Lake in dense fog, that fog eventually formed drops and we ended up wet. And, everything we saw dripped. 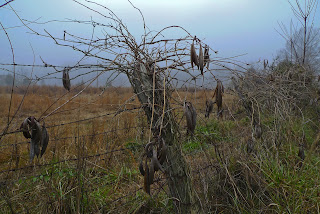 This sort of damp darkness doesn't necessarily have a negative effect on me. In fact, I rather like overcast days. (I've been known to say that they match my personality.) This one, though, took a turn toward a heavy sadness.

The county coronor called during the afternoon to ask a favor. He had with him at the funeral home two twenty-something women, daughters of a man who had died. They were the next-of-kin, one living in Charleston and the other in Chicago, planning a funeral and coming to terms not only with his death but with his suicide. Would I help? Would I officiate? No time to fill the silence after the question mark with explanations of canon law. Planning a funeral to be held on Monday is next.

But, before that. The late afternoon, still and grey, was perfect for another attempt at a panorama of a favorite spot on our usual walking route -- recently trimmed pampas grass at the 13th green on the Pine Ridge Country Club golf course. This one is better than previous efforts, but not the one just yet. But, I think it sets the tone for the end of this day. Somber and sedate.