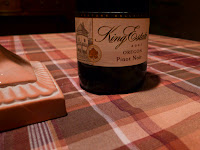 Yesterday was the the 12th day of Christmas and it was not all sorrow. I had Tal, Whitby and Belle to come home to. And, we had plans: a bottle of wine from King Estate Vineyard near Eugene OR (which we visited on our trip last September) and a long-planned steak dinner -- all in the dining room,complete with candles. 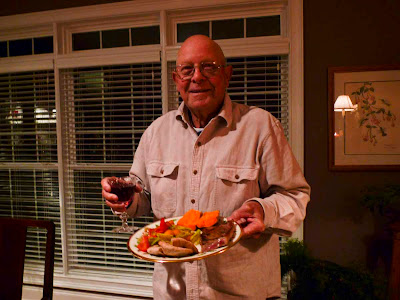 Here's Tal, always a good sport, pausing for a photo-op before sitting down to his meal. 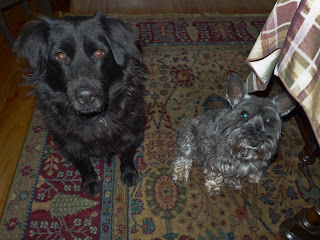 And, Whitby and Belle were at the ready as the meal ended -- very attentive, knowing they wouldn't be forgotten, that there are always scraps when we eat steak.

Taking down the tree and the rest of the Christmas decorations was the focus of our day today, the feast of the Epiphany. Tal made everything about the process fun -- from getting the boxes out of the attic to winding up the lights, from suggesting an occasional break to pushing to finish. I am so grateful not to have had to face this activity by myself.

It's always a somber activity for me. I clearly remember a post-Christmas day during my childhood and my mother commenting that taking down the decorations made her a little sad. I adopted that response making it my own. With the twinge of sadness, of course, is the sweet thought of getting it all out again one day.

The house is back to normal, orderly, ready, calm. Some years ago Tal and I went to the Hudson River Valley on a close-to-home vacation while we were living near Philadelphia. One of the sites we visited was Boscobel, a house of the Federal Period, saved from demolition in the 1950s, moved to its present location and restored. The day we toured the house the docent who greeted us issued a soft warning, telling us that the house was not set up for anything -- the tables were not set, the desks were not open, there were no flowers. The summer season was ending, the house had been cleaned and in the next few weeks it would be decorated for fall. She said that when the house was in that in-between time they referred to it as being at rest.

Well, this is no Boscobel, but it does have a name: Willowbank. And, for the moment it, too, is at rest.
Posted by Janet Tarbox at 19:49