No matter what our position in life those of us who live in (what we have named) the first world have it pretty good. The now year old financial crisis has hit almost everyone in varying degrees. If we have children in our lives, providing for their needs and well-being dominates both our waking and our sleeping. The costs of health care and the arguments over health care reform escalate. No matter what it is that troubles any of us, in comparison with people in much of the rest of the world. we are blessed, even indulged. Truly, we do not want for much.

Today has been full. And, I have been indulged. On our drive to Pawleys Island to help my parents celebrate their (get this!!!) 57th wedding anniversary, our route, as usual, took us through North. From some distance away it was evident that two C-17s were doing touch-and-goes on the US Air Force Auxillary Air Field (aka North Army Air Base). To my delight (especially since Tal was driving) on the stretch of US178 which parallels the runway for a piece, one of these hulking aircraft looked as though it were coming right for us. On that same pass I was able to watch it on my right flare as it approached the runway, not quite touching its wheels to the concrete, pulled up and accelerated to go back around. 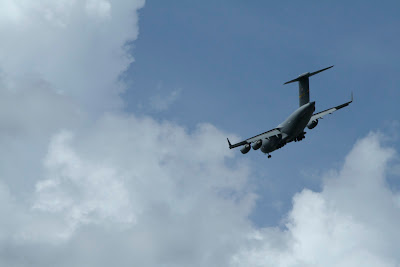 So, I saw a couple of Globemaster IIIs at North. No, it's better than that. This is the indulged part. After we passed Bull Swamp (aka Ethridge Mill Pond) on SC172, Tal stopped at the top of the hill and we watched those two planes fly over and approach the airfield. Not only were the planes impressive -- huge and powerful, but the view down that hill and across the rolling South Carolina terrain was more lovely than I can even begin to express. Oh, and the clouds were rather spectacular, wouldn't you say?