Denali's remaining hidden last evening was a perfect lead-in to a steady rain drumming on the metal roof of our room through the night. We were up at 4:30. Yawn. I have to observe, however, that other than feeling sleepy, who'd know the time, it being full light at that hour in this part of the world. Breakfast was at 5:30 and the Kantishna Roadhouse bus pulled out at 6:15. 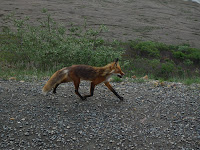 The 90-mile ride out of the park didn't take as long as it did going in. We did stop to view wildlife, the most notable being a blond grizzly sow with two cubs, a moose with twins, a lone wolf (the park is home to 65 wolves in 16 packs) and, pictured here, a beautiful fox, whose decision to stay on the road and pass by the bus we all witnessed. For many on the bus, however, there was a train to catch at the Denali depot, so our driver kept an eye on the time and stayed on schedule. We also saw, here on the 23rd of June, new snow at the highest visible elevations just below the clouds. Snow! We had an hour at the visitors' center and then boarded a specially outfitted van from Alaska Wildlands Adventures (named Humpback -- don't know if that's for whales or salmon) with box lunches for the eight-hour trip to Anchorage.

The mountains are mesmerizing to me. Monumental. I found myself almost overwhelmed as we passed through the Alaska Range to its south side (where Denali stayed hidden, the day remaining overcast after the rain subsided). By the end of the day we had entered the Chugach Range -- and had passed through Wasilla, where we encountered our first stoplight since leaving Fairbanks on Sunday. Wasilla is a spread-out, sprawling settlement. That zoning is heartedly resisted by the population is widely evident.

Also evident as we drive south was the long-term effect of the 1964 Good Friday earthquake. At the Palmer Hay Flats just north of Anchorage the land sank significantly making it no longer suitable for hay, but making it quite inviting to moose, spawning salmon and eagles. In other locations the intrusion of seawater during that same event killed large stands of trees leaving what are called ghost forests. 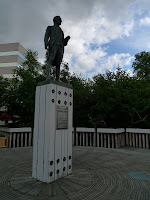 The hotel in Anchorage was a welcome sight, corporate feeling as it was after the roadhouse experience. After checking in and too tired to do much else, we walked a few blocks to Resolution Park honoring Captain Cook to look at the water of Cook Inlet and to clear our heads. We accomplished both, especially the clearing the head part, the wind coming off the water and along L Street seeming gale force. I'm still having trouble realizing it's June, all of us sporting flannel, down and fleece. Sobering when one considers what winter must be like. 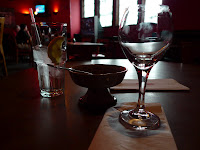 Tal is getting sick, rosy-cheeked, catching, I'm afraid, the cold our Denali bus driver of Sunday and today had. This evening was the only meal of the entire trip we had to get on our own, and we opted for a bar meal in the restaurant sharing the parking lot with the hotel, our empties shown here.
Posted by Janet Tarbox at 19:25

Sorry someone is being so generous sharing germs with Tal. Am pea green with envy about your trip. Next time I go to AK I want to do it the way you two are doing it. Hope you enjoy the rest of the trip.

Thank you, Boykin. And, what a nice surprise to hear from you.