Having been warned by many people not to get my hopes up where Denali was concerned, that is, not to count on seeing it, while we were as yet on the train ...

We were approaching the town of Nanana in a long turn lining up to cross a bridge and -- 100 air miles away -- there it was dwarfing every other mountain in the Alaska Range. Photos from the moving train and through not-so-clean windows weren't worth taking, but I made the attempt anyway. As you might expect, what I have to show for that attempt is not worth sharing.

When the train arrived at the depot in Denali and after an hour in the visitor center (the 20-minute film, "Heartbeat of Denali," was phenomenal), we boarded a bus for the 90-mile trip to the Kantishna Roadhouse where we are spending two nights. For 3/4 of the trip, well beyond the Eielson Visitor Center, a new building with the potential for commanding views, the brown foothills and slopes to about 10,000 feet were the limit of what we could see.

All along the miles we watched for and stopped to view the wildlife, checking off grizzly bear, caribou, moose, snowshoe hare, Dall's sheep, red squirrel, golden eagle. Truth be told, however, we all maintained part of our attention on where the mountain should be (accomplishing that with the help of our driver).

To our wonder and delight, after Polychrome Pass the top of the north summit appeared and then played peekaboo with us until we reached Wonder Lake where the road heads into the valley where the roadhouse is and then officially ends. This photograph was taken from about 27 air miles, the closest the park road gets to the mountain. 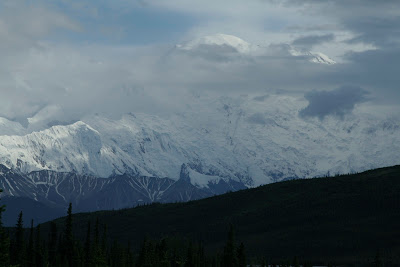 Seventy percent of the people , we have learned, who travel to see Denali leave disappointed. We are now part of an elite group: the 30% club! And, we saw it twice in one day.
Posted by Janet Tarbox at 02:08