Arriving here yesterday afternoon certainly helped ease the memory of Tuesday's exhausting hours on the road. What a gem, embedded in 2000 acres of the Kenai National Wildlife Refuge. The Kenai Backcountry Lodge sleeps 16 guests in several electricity-free cabins and platform tents. Our tour before supper included test-lighting the propane wall lantern in, Aurora, our cabin. I managed not to blow anything up, achieving success on first try. But, since it doesn't get really dark, I don't think I'll have to light it out of necessity. 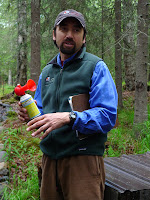 The limited electricity the lodge does have comes from glacial run-off put through a small turbine which charges six batteries. Water for all uses is glacial run-off as well, stored in several large tanks with 1/4 C of Clorox added to each 550 gallons as a precaution. That same run-off provides "refrigeration" for soft drinks and beer in the stream. Being demonstrated here is one of several alarm horns -- one long blast for fire and three short for a bear in camp.

I suppose things could get pretty exciting were that horn to be needed. But, today was not exciting. Today was simply the best. The absolute best. Water activities on the lake, which is about 15 miles long and 4 miles wide in places, were on the docket this morning -- guided kayaking and a tour of the lake in one of the larger boats, as the weather was good and threatened to change by afternoon. Tal's cold has worsened and we both decided to spend the day quietly, reading and taking time to be mindful of where we are. Tal's reading sort of morphed into a nap here in the loft library.

He's finding the bed in our cabin to be pretty comfortable, too. The Aurora is charming, overlooking the lake and made that much more inviting with a porch and two rockers. Sadly, it's a bit cool for porch sitting, but the romantic in me doesn't care. I'll always remember the potential and wonder who's getting to sit there on the more comfortable days on July and August.

Though I participated in a hike along the Cottonwood Trail during the afternoon, identifying wildflowers and noting the transition between boreal and rain forest, and saw in some detail the workings of the electrical system just before supper, mostly I walked, sat and took pictures, even hauling out the tripod for part of the day. So, no more words ... 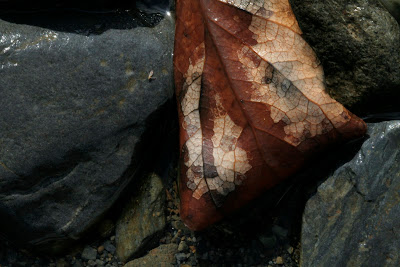 A wet leaf among the rocks on the lake's shore. 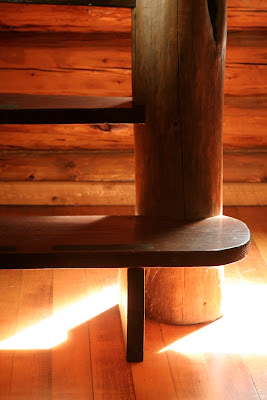 A view of the stairs in the main building. 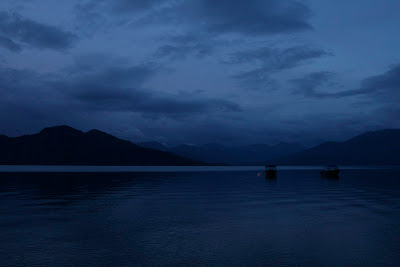 The lake after sunset.

The sun didn't go down until 11:45 and I stayed with it until it did -- and then some. I so hated to go inside. Not wanting the day to be over.