Seward is a bustling place this of year and we added ourselves to the throng in the late morning, boarding the Tanaina for our wildlife and glacier watching cruise in the Kenai Fjords National Park. Leaving Resurrection Bay, named by Alexander Baranov after having survived a storm on Easter Day, and going through a heaving Harding Gateway (only 8500 miles or so from there to Hawaii!), we entered Aialik Bay headed for the glacier of the same name. Along the way we ate lunch, observing sea otters at play inside the harbor and a pod of orcas along side the boat after arriving in Aialik Bay. 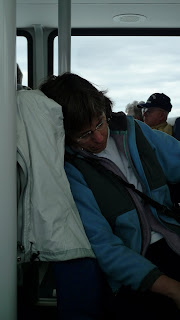 I don't have the focal length power to get good wildlife shots, so I attempted very few. And, it was rather chilly outside the salon. Venturing on deck for long periods wasn't on Tal's agenda, his cold extremely persistent, and I was just as content sitting with him. Plus, I hate to admit this, but we'll all tired, me included. Here's an endearing and telling shot of our guide and leader, Nancy.

I did go out, however, to witness the glacier up close and personal. The word 'aialik' means fearful place to respect -- and I believe it. Although I don't know how high the glacier actually is, it is enormous and our vessel had to move slowly through a vast area of brash ice and iceburgs amid much bumping and scraping in order to get along side. We watched for about half an hour, witnessing it calving and the resulting high waves. Was the glacier side of the boat ever cold. Yikes!

Here are a couple of views of the glacier. 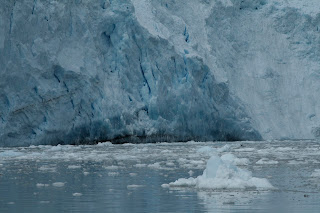 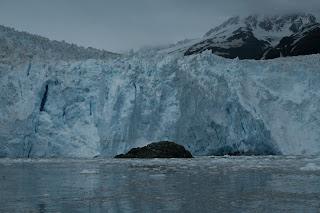 I cannot resist one wildlife photograph. After leaving the glacier and heading out to the islands at the mouth of the bay to look for puffins, Stellar seals, etc, our captain spotted a humpback whale. We stayed close and after it showed itself a number of times, the minutes slipping by ever so fast, we were about to move away when it surfaced a final time, giving us a fine finishing flourish. This isn't a great photograph by any means -- not close enough and through the salon window, but satisfying nonetheless. 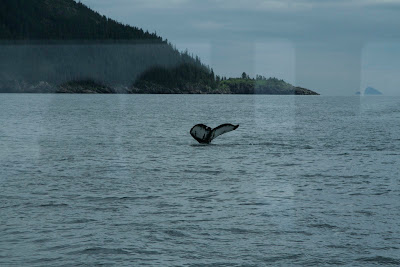