A float on the Kenai River

But first ... breakfast, bags outside the door, check out ... the usual drill. So far all six of us have been ready early for every rendezvous. Nancy seems pleased and impressed.

Our first of two stops along the Seward Highway as we made our way to Cooper Landing to begin the rafting trip was a stunning spot called Bird Point, overlooking a tributary of Cook Inlet known as Turnagain Arm. We'd had an early start, so sun was at a lively and dramatic angle. And, as you already know, I am drawn to mountains. Plenty of those here. 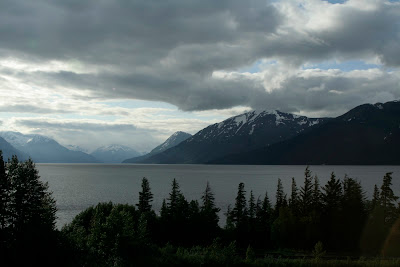 How this body of water earned its name is interesting. During James Cook's expedition into this part of the world he was hopeful that this opening on the bay would prove to be the long-sought northwest passage. When he came to the dead end, he had to turn around again. His disappointment is our delight, both in the beauty of the place and the catchy name.

The second spot at Tern Lake very near Cooper Landing was equally dramatic. This spot is named for the birds that made a migratory round trip of some 25,000 miles -- the arctic tern. They're delicate-looking, with pointed wings and a forked tail. They hover until, spotting their prey, they plunge unto the water, a feature which foiled my hasty photography attempts.

At Cooper Landing and AWA's Riverside Lodge we proceeded to put on everything we owned! For me that meant long underwear, a heavy shirt and jeans, my down vest, rain gear and gloves. The staff added knee high rubber boots and a knit hat to the ensemble. So very attractive ... fashion plates all. Pictured here is Connie helping Peter get his binocular strap and rain gear hood in order.

The section of the Kenai River between Cooper Landing and Skilak Lake is relatively calm, mostly class I with three canyons along the way providing class II water. Our guide for the trip narrated, helped us spot wildlife and, aside from a period of driving rain and a couple class 2 splashes, kept us pretty dry. A major item of interest this time of year was the first run of sockeye salmon -- and the fishermen, particularly where the Russian River joins the Kenai. The anglers stood in the water along the bank, literally shoulder-to-shoulder in spots, and cleaning fish right on the shore caused drifts of carcasses downstream to the delight of very well-fed gulls and eagles. This photograph doesn't do justice to the sight, but does show two of the three rafts in our group, our group of six being in the first. 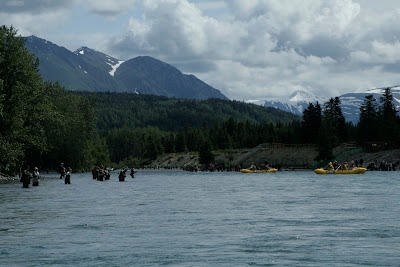 We stopped for lunch along the way, a lunch prepared by the three raft guides while we stood on shore watching the drift boats go by, our cold hands wrapped around cups of steaming tea, coffee or hot chocolate. When the guides called us over, the spread was a very pretty sight, well worth the wait.

When we reached Skilak Lake our guide dropped the motor in the water (no, not the entire motor) and took us to the Backcountry Lodge on the lake's far side where we were reunited with our shoes, all liked up on the beach waiting for us.
Posted by Janet Tarbox at 13:09

Ter-ibble Lil KnuckleHeads, Life, & Everything Else

Thank you. I like making them, but don't get much practice.