The rest of Monday

As Calvin (of the fondly remembered comic strip Calvin and Hobbes was wont to say, "The days are just packed." Today is one of those wonderful days.

Our lunch following the wildflower hike along the Moose River was served at the roadhouse. (Those guests who went on the two more strenuous hikes ate sack lunches on the trail.) Tal and I attended the dog sled demonstration in the early afternoon (see below); watched the gold panning activity for a few minutes, slipping away to walk the upstream trail along the Moose River; and skipped a short field trip to an historic cabin associated with gold mining in the area and truly at the end of Denali's road. After another delicious meal (I had the vegetarian choice -- stuffed acorn squash), we heard/saw a photography lecture by one of the resident guides. The 9:30 PM field trip back to Wonder Lake for Alpine glow (alpenglow) photography was cancelled as Denali was not cooperating. See what I mean about a packed day?

Emmitt Peters, whose father (Emmitt Sr) won the Iditarod as a rookie in 1975 and who ran the race in four different decades, is from Ruby and trains the six sled dogs at the roadhouse. These dogs are rescue dogs from an animal shelter in Fairbanks and are being trained over the summer for adoption by sledders. Traditional sled dogs, malamutes, are being bred with other breeds including Labrador retrievers (decreasing race time by not having to go around shallow water), Irish setters, border collies and greyhounds -- for increased agility and intelligence, as well as for shorter coats, given the warmer winter temperatures along the racing route. Already the two lead dogs at the roadhouse, Reba and Salmon, have been spoken for.

After the lecture the raring-to-go team was hitched up -- the two lead dogs (generally females), two swing dogs, two wheel dogs (the strongest dogs, generally alpha males) -- and they took off pulling a 600-pound 4-wheeler with Emmitt aboard. Such energy. And, such love between trainer and dogs.

While helicopters and snow mobiles are faster and perhaps more efficient, there are increasing numbers of people in these parts using dogs and sleds in winter. And, in the park old part of the park when the roads are closed during winter, the only two choices for transportation are dogs and cross country skis.

That slows things down and keeps things quiet for sure.

I'll end again with Tal -- here giving a behind-the-ears scratch to T-Bone and his harness-mate, Enya. 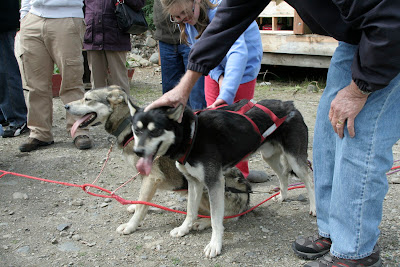