Not only was giving up and going to bed last night difficult for me. Leaving the Kenai Wilderness Lodge this morning for the next item on our itinerary was even harder. But, lingering looks did come to an end and it was into the boats for the three mile trip across the lake to the landing where a van waited to transport us back to the lodge in Cooper Landing. The "sit and spin" movement, being demonstrated here by Joan, was pretty much the same for getting into the rafts on Wednesday as it was for getting into the boats this morning. Not particularly pretty, but effective. 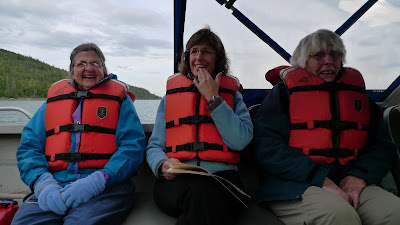 Obviously, the boat ride was right fun -- and cool, 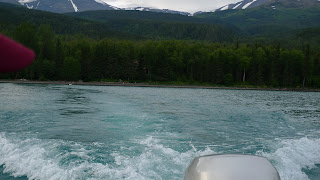 even while all evidence of the lodge disappeared into the woods behind the boat.

Back at Cooper Landing we transferred to a nicer van for the trip to Seward. When we were here on Wednesday being suited up for the rafting trip down the Kenai River to Skilak Lake, I was so focused on the task at land that I didn't pay much attention to the atmosphere at that lodge. It is a charming place, right on the river, featuring a captivating phone booth. 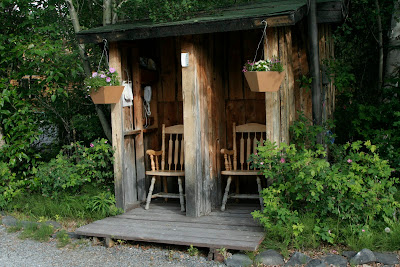