Tourist with a capital "T"

Waking early in Alaska is easy. And, today is the day for reveling in the light. Not only is it the summer solstice, it's also a day when -- here -- the sun will not set at all, actually setting tomorrow morning at about 1:30 and rising again two hours later. Beyond the particularities of celebration I mentioned in yesterday's post, the local golf courses are offering tee times all night tonight and there's a baseball game scheduled for midnight -- without lights on the field. There is most certainly an air of excitement. And, fact is, we're part of it. Our trip is entitled "Alaska: Enlightenment Under the Midnight Sun." May as well go with the flow, I guess.

We did wake early and enjoyed a wonderful continental breakfast in the hotel dining room: delicious oatmeal followed by fresh-from-the-oven cranberry muffins. At the last possible minute, realising our group was not scheduled to assemble until after 3:00PM, we decided to play tourist and cruise the Chena River aboard the riverboat Discovery. It was a three hour tour (yes, I did hum the "Gilligan's Island" theme song at least once) down stream from the landing in the vicinity of the Fairbanks International Airport to the point where the Chena joins the Tanana. Some of the events along the way were pretty cheesy, but the scenery and the commentary were very enjoyable. 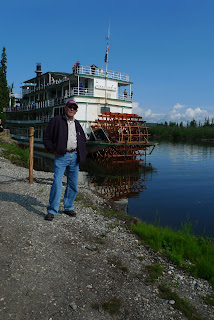 This is a photo of Tal taken at our one stop during the morning. The sternwheel has 20 paddles and, while it does propel the vessel, two bow thrusters and one stern thruster on each side do simplify navigation. When we reached the Tanana, the ship matter-of-factly turned around, its center point remaining stationary. (It reminded me of learning to turn a canoe, the front paddler doing a forward sweep on one side while the paddler in the back did a backward sweep on the opposite side.) Not possible, I suspect, in an authentic riverboat, poles and lots of manpower doing the work.

We meet our group as I said after 3:00 at which point we will tour through Fairbanks, without stops, on our way to the Museum of the North at the University of Alaska. Photographs I have seen of the musuem are striking, a modern structure designed by Joan Soranno and intended to convey something of Alaska's expansiveness. We will return to the hotel for supper and an orientation to our week with the Road Scholar group and drive north of town to see the Alaska Pipeline.

Since we won't return to the hotel until about 10:00 and we have to be at breakfast at 6:00 in the morning, I'll likely not write any more today. I do not have any idea about the availability of internet in the Denali National Park -- where we are going tomorrow via the Alaska Railroad and small bus, so I may fall silent for a couple of days. Be patient. I'll be back!

But, a closing photograph ... this one of the Chena taken from our lunch table after our morning on the Chena. 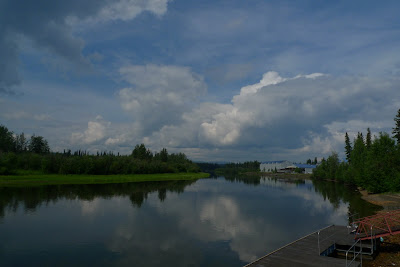