My ears perk up at every mention of the Red River. It is out of its northward-flowing banks and promising to make this weekend an exceptionally trying one for the citizens of North Dakota and Minnesota. This is photograph of the Red River taken in June of 2006 during an overnight stop on our way to Shining Falls Lodge in Manitoba. I am standing with my back to Grand Forks ND; Tal is in the picture, on the right and wearing a white shirt, looking toward East Grand Forks MN. 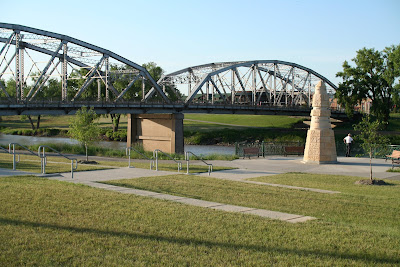 The park was built over the years after the last major flood in 1997. The obelisk documents the high water levels in various years, 1997 having been the most excessive, topping out at 54 feet and submerging the roadbed of the Sorlie Bridge. I understand that the flood extended three miles inland on either side of the river. The welcome center on the Canadian side of the Pembina/Emerson border crossing, as you might imagine, features astounding arial photographs of the event.

And, here's Tal at a lighthearted spot on the North Dakota side of the bridge. I pray for the people along the Red River more light-hearted spots, moments and days. This flood of 2009, though, may well put 1997 to shame.
Posted by Janet Tarbox at 20:15