That is the way a friend from a former parish oftentimes begins her handwritten, snail-mailed notes. It's as though she's walked into the room in search of me. "Ah, there you are!" she says, and then launches into animated conversation. She's lively in person and her notes are only slightly less so.

I have been missing. I didn't take the month of February off intentionally. That just happened. And, I don't have much to show for the time I've been hidden away, but I think it's been a productive time, nonetheless.

There have been travels. Six days to Virginia (VTS Alumni/ae Executive Committee and Board of Trustees, plus a visit with the Mechanicsville Tarboxes coming and going). An overnight in Clinton SC for the launch of the Episcopal Search Committee. Another overnight in York SC for the York Place board retreat.

There have been several exceptional events. A Superbowl party to which the local NBC affiliate came (yes, to Edgefield of all places!). Lunch at a new restaurant in N Augusta with a friend. A farewell performance of Riverdance in Columbia. The consecration and dedication of the new chapel at the Bishop Gravatt Camp and Conference Center here in the diocese. Takeout pancakes and sausage on Shrove Tuesday.

There have been periods of quiet. And, it is that aspect of the month which is proving most noteworthy. Writing a piece (on desolation) for our diocesan publication, Crosswalk; preparing three meditations (on forgiveness) for a quiet morning I am to lead next weekend; readying myself to enter several photographs in a local gallery in mid-March have required intentional solitude, focused study, determined courage. Long walks more for simply being than for fitness or even for thinking have taken up countless hours.

From outward appearances February was a fallow month. But, I'm old enough and observant enough and appreciative enough of our earth's cycles to know that there's significant growth happening out of sight during the most fallow of times.

A postscript: The rains arrived late on Friday and the water continues to fall this afternoon. Almost 48 hours so far. Yesterday some periods of precipitation were so long and intense that the overflow on the pond couldn't handle the water. Fortunately, Tal's son, Bruce, was visiting for the morning and together they widened the spillway in time to save the dam. But, it was close.

The photograph to the left shows our normal route across the spillway and onto the dam. Below is a view of Tal and Bruce at work. You can see in the upper left quadrant where the water had been crossing the dam before they increased the flow through the spillway. 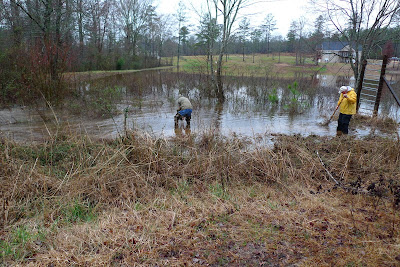