Along the English Channel

With the Lambeth Conference drawing to a close and there being more than adequate staff at the VTS booth at the University of Kent, we struck out today to the south. One of the places we had wanted to go, for the romance of it I suppose, was Dover. Every time we mentioned it, however, locals would say something to the effect that they understood, by all means make the visit, but Dover’s not a particularly nice spot, as English spots go. Repeatedly Rye and Hythe were recommended as alternatives. 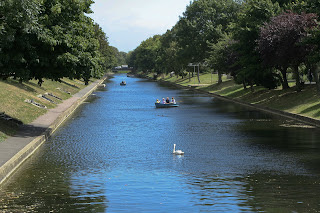 One of the proprietors of our B&B hotel is from Hythe, on the English Channel, to the south and east of Dover. He had business in Hythe and offered us a ride mid-morning. Our “GOLD MegaRider” bus passes would get us back. All I can say is wow! Hythe is a quaint, not-so-little town dominated by three things: a traditional, narrow, busy High Street (I’ve learned that most English towns have a High Street, which is the main business of the town is/was conducted); the rocky pebbley beach followed, just inland, by high bluffs; the Royal Military Canal, built for coastal defense during the Napoleonic Wars.

The day could not have been nicer. A long, leisurely walk on the very picturesque canal, complete with conversations with fishermen, young and old (two of the younger ones being pictured here). A venture out to the Channel where it was so windy and wild that we stayed for only a moment and I didn’t even take the lens cap off the camera. A quiet sit along the canal where we enjoyed the bottle of water and the biscuits (what we Americans call cookies) we’d brought from the hotel.

When we were ready to return to the Canterbury, we caught a bus which took us west along the coast to Folkestone. There -- with the kind assistance of the driver -- we changed to the Canterbury bus and found our way back to the hotel, another adventure to savor. 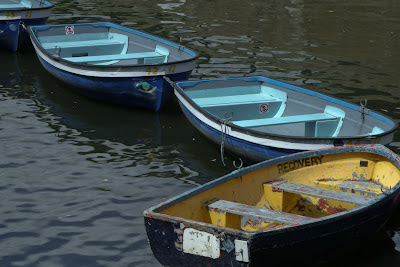