Deal or no deal

We set out for Deal this morning on a bus – a local - which took a circuitous, fascinating and even exciting route through the countryside, first east to Sandwich and then winding south to the coast at Deal. Whether we ever reached Deal Castle, an artillery fort built by King Henry VIII and resembling the shape of the Tudor rose, mattered not at all. The scenery was simply too dramatic to take in, much less to describe, and seated as we were in the front seats of the bus’ second level we were treated to some drama as well.

For example: The day before, when we travelled south to Hythe, I’d wondered about the almost squared-off tunnels the roads take through heavily wooded areas. Sitting up top, I soon realized why (and perhaps how) those tunnels are as they are! The impulse to duck would take a long time to tame and I’m positive it won’t happen this visit. 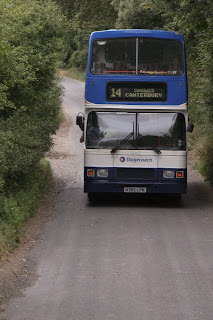 And a question: What happens when the #14 from Canterbury to Deal is running five minutes early? It meets the #14making the Deal to Canterbury run. Head on. On a very narrow stretch of road – 6.5 feet in some places. One driver or the other has to, as they say, give way. The westbound driver did just that, backing to a spot where there was a wide place on the left side of the road into which our coach pull. The two gentlemen paused as their open windows came together. Rather than exchanging harsh words or even blows, our driver apologized for having not waited to glimpse the other coach before proceeding onto the single lane road, knowing as he did to expect him. The other man graciously accepting the apology and we all went on our way. Note in the photograph that the driver of the other coach gave up using the mirrors. He's hanging out of the right side of the bus, steering one handed.

Deal Castle, situated on the coast between Sandwich Bay and the Straits of Dover, is, as the rose shape would suggest, circular. From the outside it’s low and somewhat menacing in appearance; inside the rooms are oddly shaped and the passageways long, curving and dark, although all the interior rooms are lighted via skylights from the walls into the rooms one floor below. The king wanted/needed the coastal forts very badly and in a hurry; Deal Castle took just over a year to complete, from 1539-40, utilizing some 1400 poorly-paid laborers in the process.

By the time we arrived in Deal it was very grey and spitting rain, so for a second trip to the sea in as many days I have only this single, so-so photograph to show. 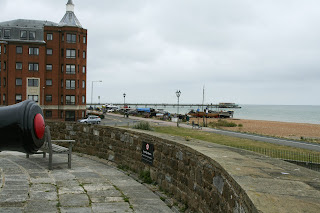