That's how we spent much of this day. Literally seeing the sights. Tal's knee woke him up early this morning and is, to put it kindly, bothersome. Rather than stay in our room we headed to the bus station, our £17 week passes in hand, and road the loop from Canterbury to Hearne Bay to Whitstable -- both north of Canterbury and coastal towns on the North Sea -- and back, a round trip of about two hours. While Hearne Bay didn't particularly tempt us to get off, it was hard to stay aboard at Whitstable. What a charming town on a drizzly Sunday morning. Given the dampness of the day and the condition of the coach window, photos were hard to get, but this one bespeaks something of the attraction. 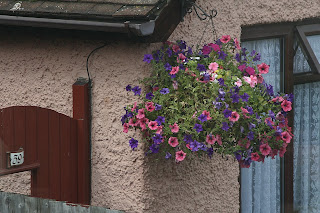 We returned via Canterbury's Westgate. These two shots, while not particularly artistic, do demonstrate the challenge faced by the drivers. It's a slim fit! And, the scrape marks on the stone tell the tale: not every passage through is clean. 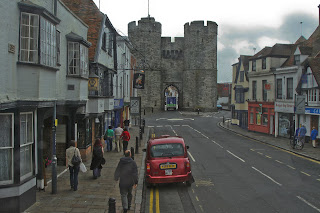 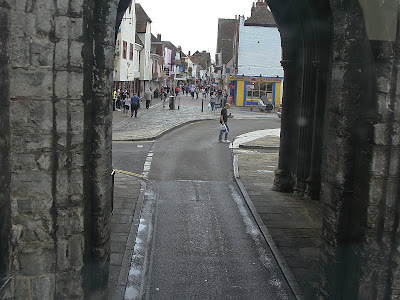 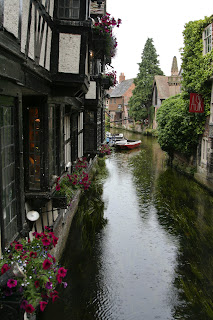 We had our usual tea back in our room and strolled to dinner in the early evening. Not sure of where we were heading and having one false start (once inside the menu wasn't very inviting and the drill of ordering and getting seated none too clear), we ended up at a place called The Old Weaver's House on High Street and alongside the canal running through town. We ate in the garden under a covered arbor, complete with ripening grapes overhead. Enchanting is all I can say. This is a view from the street along the canal. The boats -- just visible -- denote where the garden is, that also being where those who take the canal tour embark and disembark.

Given the distance between Canterbury and Gatwick and our mid-morning flight on Tuesday, we are leaving here tomorrow and spending our last night in Great Britain near the airport. Leaving is going to be hard. It has to be done, of course. And, we’ll both be grateful for the decision to head toward the airport early. Getting on the 5:16 train in Canterbury before a 10:40 flight out of Gatwick would simply stretch every nerve!
Posted by Janet Tarbox at 21:55