A walk in the garden

Three major activities yesterday – to the University of Kent in the morning for some time at the VTS booth, the afternoon in and about the cathedral and back to the university in the evening for the VTS dinner -- were more than enough. This morning we were up at the usual time and enjoyed, once again, a marvelous breakfast. On returning to the room, however, Tal stretched back out on the bed, under the covers -- and there he stayed until lunch, sleeping deeply, snoring softly. Spent. Exhausted.

This afternoon we took a slow walk looking for three things in particular, but only if we found them where we thought they would be AND on the first try. No back-tracking; no holding the map upside-down. Not a job; not work. Those three things? The River Stour, which we saw as we entered Canterbury on Monday; the canal; and the Westgate Gardens, where there is a notable plane tree.

Our slow walk ended up being two+ hours of discovery during which we found the three things we were seeking in the order I listed them – and more. By walking in the Westgate Gardens after we’d found the plane tree, simply seeing where the path lead, we ended up, effortlessly it seemed, within sight of the Castle Hotel, having bypassed the narrow streets, hordes of people, small, quick cars all of which make walking almost a contact sport.

That garden in which we walked was charmed, it would seem. And, today's three activities more nurturing than yesterday's.

This is the Chapter House of the Greyfriars which spans the River Stour and, dating from the 13th century, is the oldest Franciscan building in Britain.

A city landmark, this plane tree (which to my eye resembles a sycamore; see the additional photograph directly below) is said to be over 200 years old. I have spotted two more this week: one on the grounds of the cathedral and one threatening to wrap itself around an iron fence at the ruins of Canterbury Castle across the street from our hotel. Unless it gets cut down, I predict it will prevail over the fence. 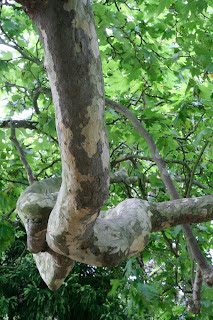