No, in the title for this post I am not describing the Lambeth Conference and the Anglican Communion. Our time near the conference’s activity is very limited, limited in fact to visiting booth-to-booth in the Marketplace and spending time with the VTS contingent there. In conversation with those who are, indeed, deeply involved in the deliberations of the gathered leadership of the Anglican Communion I have learned that moments of grace interject themselves into the expected contentious debate. So, fracture would be unfair at this point, despite there being those present who want nothing less than total fracture and are working pretty hard to achieve it.

Rather, I am describing myself as somewhat fractured. Aside from the booth and participating in the VTS dinner this evening, our primary activity today involved time at Canterbury Cathedral. I tend to make every activity into work, ever justifying what I am doing by making it hard or tedious or making myself feel somehow productive and thereby useful. Sigh.

Knowing that about myself, first of all, and having heard that the guided tour of the cathedral goes on for two hours or so and being aware of Tal’s fatigue threshold, we opted not to be optimal tourists today. Letting the building be and letting ourselves be in the building was a conscious choice and a different experience. I discovered in myself some real discomfort in that unaccustomed role – being as opposed to knowing, interacting with the space rather than busying myself knowing about the space.

That unsettled state was intensified by the teeming, not-quiet crowd in the cathedral, this being the height of the English tourist season. It took deliberate effort simply to observe my mounting irritation, being witness to it rather than being irritated. Twice we stepped outside for a breath of air, to clear our heads, to gaze at the flamboyant order of the gardens. There’s a line from a collect in The Book of Common Prayer that, blessedly, kept murmuring calm to me – “that in returning and rest we shall be saved.” In returning … in returning … in returning. 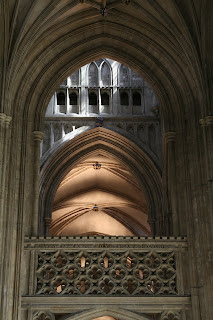 So, here I am post-cathedral, left with no overarching or particular knowledge of Canterbury Cathedral -- of the various architectural styles present, of the dates of the major construction periods and the like. But, I have come away with flashes, impressions, sensations – the angry, red, scralled letters carved in the stone floor where Thomas a Becket was martyred, the quality of light filtering into the choir from the central tower, the moist cool of the air in the crypt, the mason’s marks left in a section of stone along a side aisle, the modern furniture at the altar on the floor of the nave. 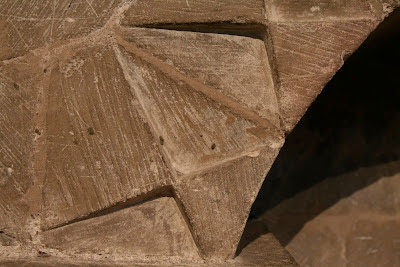 So, fracture is the word of the day. But, perhaps it’s not automatically a negative description. To change, to grow, to become involves letting go the comfortable, the usual, the easy. Fracture may be too strong a word; unsettled might be more accurate a description. But, since fracture was what came to me first, I’ll own it for now.
Posted by Janet Tarbox at 23:13