I am sitting on the upper deck of the M/V Grande Mariner in the Oswego Harbor looking out at Lake Ontario.  My perch is one of two spaces that jut out slightly behind the pilothouse on either side of the ship.  This morning I have chosen the port side (think left; both words having four letter is how I came to remember it) since the lighthouse, a small double structure of dwelling and light, both white and roofed in red, is on this side.  It sits on a long breakwater which curves into the mouth of the Oswego River from the west.  Its right side will be illuminated soon as dawn gives way to daylight and the sun rises.  It is 5:30; we are departing at 6:00.  Our destination today is Rochester.

Since we left home last Sunday, I have been keeping the journal as usual and camera use has been high.  No surprise there.  Computer time has been another thing all together.  The choice made itself.  The rivers we have sailed – the East, the Hudson, the Mohawk and the Oswego—and the canals we have navigated – the Erie and the Oswego – have claimed my near complete attention.  The weather over these days has been variable: wet to dry, cold to hot, overcast to sunny.  With foul weather gear I have been able to be out in most of it, drinking in the landscape along the rivers and marveling at the rise and fall of the ship in the locks.  There simply hasn't been time for computers.


In both sets of locks we have been something of a spectacle, being the first cruise ship to use the New York State Canal System this season.  At almost every lock there were a few locals ready to watch us lock through.  But, no place along the system could top the greeting our ship received in Waterford where the Mohawk joins the Hudson.

We were escorted from the Federal Lock just north of Troy to Waterford, the canal's official beginning, by a large tug boat where a cluster of state and local dignitaries, the president of Blount Small Ship Adventures, a knot of television crews and reporters and onlookers of all ages awaited us.  Waterford’s fire truck pumped a long arc of water into our path.  The return of the Grande Mariner to the canal system was an event of special note. 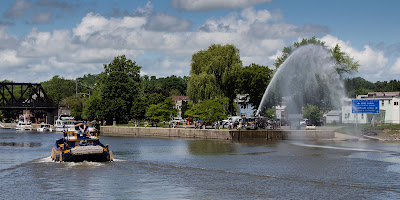 Last year this time Tal and I were on her first Warren RI to Chicago IL run of the season.  Because of heavy springtime flooding in the northeast the Erie Canal opened late.  We entered it on its opening day.  But the water on the Oswego Canal was still too high for the ship to use and our itinerary was adjusted rather severely.  (A tour of historic waterways by bus was an interesting turn of events.  More about that in Meanderings from 17 May to  2 June.)

Then, on Blount’s last runs of the 2011 season two of their three ships encountered Hurricane Irene and Tropical Storm Lee while in the canal system.  The passengers required rescue, the ships ended up trapped for 70 days and the state of New York spent millions repairing the locks and canal enough to free them.  Hence, the celebratory flay waving at the advent of the 2012 cruise season.

After all that a celebration and some handshaking was in order.  I decided it was a good sign; Tal and I should sail all the way to Chicago on this try.  It was our celebration, too.
Posted by Janet Tarbox at 17:50