A day of bridges

On Wednesday we departed the Blount dock in Warren well in advance of the publicized sailing time of 2:00PM.  All the passengers were aboard and enjoying a first meal and the tide was going out.  If the captain had waited until 2:00, we would have likely ended up enjoying dinner in Warren.


Last night the tables were turned; our departure from Newport was delayed by an hour and a half.  Given the unsettled weather the captain advised us to take advantage of the motion sickness remedies being offered and explained that we would not leave Newport until 9:30.  We were going to be in the Atlantic Ocean for about 90 minutes as we left the mouth of Narragansett Bay and made the turn west to enter the protection of the Long Island Sound.  His hope was that everyone would be in their cabins and ready for bed before the "rockin' n' rollin'" began.  Oh, what a ride.  And, then what a marvelous sleep as we sailed through the night.
We awoke, not surprisingly, to dense fog.  As we approached the East River after breakfast, the fog experience was made more intense by the regular sounding of our fog horn and several of the crew at the bow on both levels straining for sight of channel markers and other boats and obstructions.  The moment the Throgg's Neck Bridge miraged into view was ... well, beyond description.  (See my photographic effort for this date at my Flickr page.)

From there we sailed the East River to the southern tip of Manhattan and paused for a leisurely time bobbing about at the feet of Miss Liberty.  As we admired her and relished the moment, some thoughtful soul on the crew played Kate Smith's rendition of "God Bless America" over the PA.  Then, we made our way into the Hudson (not actually a river until beyond Albany, as it's tidal for 150 miles inland, making it an estuary of the Atlantic Ocean that far).
In total, we sailed under 14 bridges today (and, from Miss Liberty I could see the Varazanno-Narrows in the distance through the mist).  Need I say I photographed every one?  Probably not.  I shall refrain from "sharing" either images or bridge names in the proper order.  But, my parting shot is below -- looking back through the sea smoke at the fading George Washington Bridge from some distance up the Hudson.  Sigh ... 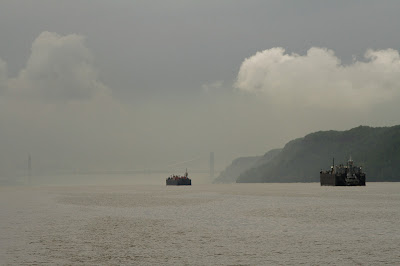