While we were away for the Thanksgiving holiday, great numbers of leaves fell in our yard. On arriving home we were struck by the fact that we could see the pond from the driveway and that had we not known where the driveway was we might have missed it! So, this morning everything but leaf duty fell by the wayside.

It was a great day, despite my current aching exhaustion. It's been a long time since I've participated in the raking, blowing, mowing, mulching, spreading involved in restoring the yard to neatness. I enjoyed it immensely. The relatively safe physical labor meant that I could let my mind wander to think about a host of other things -- furniture needing new upholstery, our Christmas letter, scheduling the dogs for grooming. I also tried to make myself remember all the comics I could that usually included leaf-raking in fall strips -- Peanuts, Hagar the Horrible, Calvin and Hobbes. Who knew leaf raking's such an iconic activity?

By the way, we did manage not to engage in one nearly essential part of those comics. We refrained from jumping in the leaf piles. "We" doesn't include Whiby, who spent lots of time plowing through them.

Before we returned all our tools and equipment to the garden shed I took a few minutes to prune the troublesome Abelia at the intersection of the driveway and the front walk. It had become brittle, overgrown, dreadfully misshapen since we planted it nearly six years ago. Plus, it was ugly and in the way. 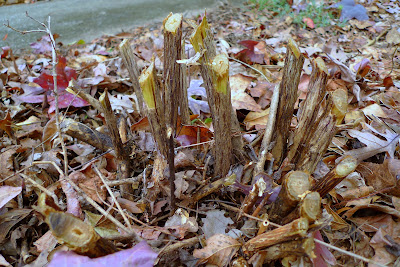 You can tell I was tired, I suppose. But, I think it looks so much better than it did! There's alot to be said for simple, straight-forward, contained, small.

Fret not, the poor butchered thing will be moved shortly to a better, more open spot and be allowed to begin again.
Posted by Janet Tarbox at 22:10