It was three weeks ago today that Tal and I enjoyed 15 or so hours in the Anchorage International Airport, an experience that seems so very long ago. After flying across the country, stopping in Minneapolis and Memphis along the way, and arriving home exhausted, we've not quite yet settled into a routine despite our best efforts. But, we're getting by rather well.

In fact ... we are having an unseasonably cool weekend -- not like our typical July at all. Currently, it's 65 degrees and the doors and windows are open. AND, Tal took me fishing yesterday. One of our favorite bodies of water, known as Satcher Pond, had beckoned all week, quietly invading my thoughts at unexpected times. I mentioned this and the possibility of acting on it during the day on Friday and immediately Tal, deeply pleased by the suggestion, I judge, began making plans, cleaning up and loading the boat, assembling and checking tackle and the like. We were so organized we sprang from bed at the 5:00 alarm and were on the water by 5:30, long before sunrise.

We caught lots of fish, keeping two for our breakfast of fish and grits and biscuits. Not particuarly physically nourishing, I realize, but nourishing in other pretty powerful ways. 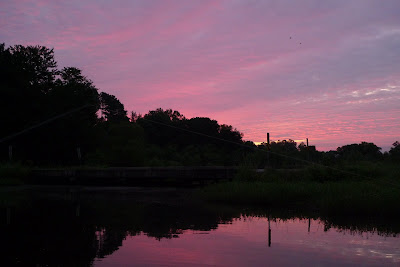 We fished mostly at the far end of the pond, at the Weaver Road bridge. This photograph was taken in the vicinity of 6:30 and features, rather indistinctly given the light level at the time, Tal's fishing rod and line in addition to dawn's luscious color. Enjoy!
Posted by Janet Tarbox at 09:21