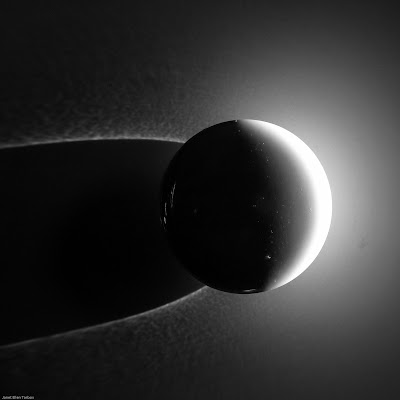 Isn't this a dramatic image?  To me it looks like a planet and the shadow it might cast into outer space.  Actually, it's an early-morning photograph of a drawer knob in my mother's kitchen.  Mom and I walked in at just the right moment to catch the sun at just the right angle and the camera was within reach.

I had to go looking for it after a conversation I had this week.  While we talked I searched for a word in the back of my mind, one to encapsulate the gist of it all.  "Attachment" didn't come to me for several days.  When it did, however, attachment ushered me past itself almost immediately.  Ha!  I didn't have time to become attached to the idea of attachment, at least this time around.

What was beyond attachment?  Where did I go?  I think I went straight to wondering about what was in the shadow, to whatever dwells in that dim darkness beyond the concept.  It was then I had to find this photograph.

What's in my own shadow?  In some ways it seems to me that our attachments keep us from taking a peek into the dark.  We're afraid of what's out there.  So, we hang on to what we know.
.
I suppose if we found out, if we ventured into the murk, we would discover new things.  Maybe.  New things about the world, about ourselves.  It would change us.  And, we all know, if we change one thing, that one thing is connected to absolutely everything else.  Oh my, how messy that sounds ...

It's easier not to look, I realize.  But, it is terribly hard to live scared.

What's out there? In that cone-shaped space?  In the dark?
Posted by Janet Tarbox at 21:43