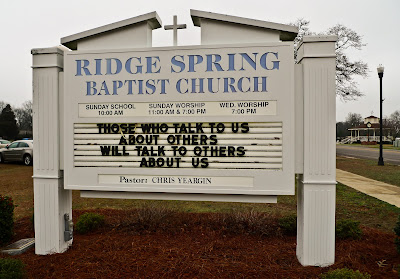 For several years I made a point of photographing church signs.  That is, until something changed.  I don't know if that something was something about me or something about the sentiments on the signs.  It seems to me, in general, the signs reflect our times.  They are a bit more pointed and much more mean than they used to be.

When I last had occasion to drive through Ridge Spring and I noticed the message on the sign at the Baptist church.  While I didn't stop to make a photograph, I did think about the message -- a lot.  This morning I included the camera in the things I put in the car as we were heading to church just in case the message were still there.  As we left Grace Episcopal and turned toward home, I asked Tal to pause at the curb.

So, what do you think?

For me, I was convicted when I saw the sign.  And, not primarily for fear that someone was going to talk about me, although that part seized my attention, too.  The habit of talking about others involves lots more finding fault than it does expressing admiration.  And, even though such talk might serve to elevate us somehow, in truth, it does nobody any good at all.  It tears down; it does not build up.

I shall refrain.  Well, I shall try to refrain.  I hope I'll manage a better example in the years I still have than I have during the 58 years I've lived so far.
Posted by Janet Tarbox at 18:01

hi janet,
i love your musings and photos.
we are hosting a women's retreat (geared to christian women) for our United Church of Christ UCC women. The retreat is open to all adult women though. I found your photo of a bench in the woods on flicker, which i would love to use (with appropriate credit) on a flyer. it's not going to be widely published..just in our Spring, Texas area through church avenues. Would you be able to release the photo to me for this limited one time use? Jane
Kelsowinter@earthlink.net

Oh, dear. I just this moment checked in on blog comments. It's been a while. Anyway, although it's probably way too late now, please to feel free to use the photograph. Thanks for reading!